A statement in condemnation of police violence, from the faculty of the Department of Criminal Justice and Criminology at Washington State University

In light of the most recent in a heartbreakingly long series of events involving police violence on communities of color, especially black women and men, the Washington State University Department of Criminal Justice and Criminology reaffirms our faculty’s commitment to principles of social justice, including that of anti-racism. As we train the next generations of criminal justice professionals, we are keenly aware of the importance of helping them develop the knowledge and skills that will enable them to be the agents of positive change the field so desperately needs. We dedicate ourselves to addressing issues of systemic racial bias through not only our teaching but also our research, with which we aim to guide reform. We, as a faculty, vow to continue the pursuit and promotion of a more just society through education, research, service.

The Department of Criminal Justice and Criminology has a long rich history. In 1935, the President of then, Washington State College, Dr. Ernest O. Holland, contacted the nation’s first ever FBI Director, J. Edgar Hoover, for guidance in creating a program for the sole purpose of training law enforcement officers (September 18, 1935 Letter, October 3, 1935 Letter- Part 1, and October 3, 1935 Letter- Part 2). In 1943, under Dr. V.A. Leonard, the Department of Police Science was formed. Since then it has expanded beyond training police officers to touch on every aspect of the criminal justice system.

The department offers both graduate and undergraduate degrees; students may earn a minor, a bachelor of arts, a master’s degree, or a doctoral degree in criminal justice and criminology. We have degree options to suit today’s students, with our B.A. offered both on campus and online. With groundbreaking research, renowned professors, and students who are making a difference, WSU is an exciting place to pursue your education. 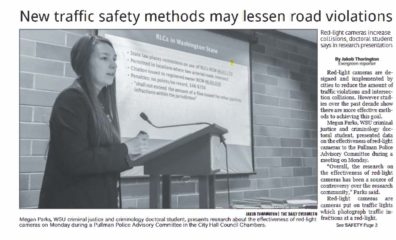 Undergraduates benefit from a policy-focused curriculum that prepares them both for careers and future study, learning from leaders in the field.

Graduate students work closely with faculty, pursuing a more comprehensive understanding of the field of criminal justice and developing as scholars and researchers.

Department faculty have a wide range of research and teaching interests, and the department is nationally and internationally recognized for its scholarship.