President Barack Obama announced in October the appointment of Dr. Nancy Rodriguez ’98 PhD as director of the National Institute of Justice. The NIJ is the federal agency that serves as the research, development and evaluation arm of the U.S. Department of Justice. It’s dedicated to improving knowledge and understanding of crime and justice issues through science. NIJ provides objective and independent knowledge and tools to reduce crime and promote justice, particularly at the state and local levels.

Dr. Nancy Rodriguez is a professor in the School of Criminology and Criminal Justice at Arizona State University (ASU), a position she has held since 2012.  She first joined the ASU faculty in 1998.  Dr. Rodriguez recently completed her tenure as Associate Dean for Student Engagement in the College of Public Programs at ASU. Prior to this, she was an Associate Professor from 2004 to 2012 and an Assistant Professor from 1998 to 2004.  Dr. Rodriguez is an Executive Counselor of the American Society of Criminology (ASC).  She is a recipient of several awards for her research, including the W.E.B. Dubois Award from the Western Society of Criminology, and the Coramae Richey Mann Award from the ASC Division on People of Color and Crime.  Dr. Rodriguez received a B.A. from Sam Houston State University and a Ph.D. from Washington State University.

This story is featured in the Washington State Magazine. 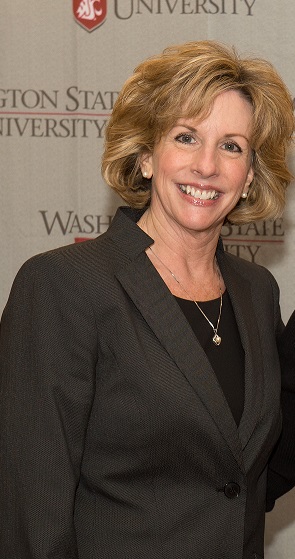 President Barack Obama signed an Executive Order on Dec. 18, 2015 to create the Task Force on 21st Century Policing and announce its members. The Task Force, which includes Susan Rahr ’79, is part of the Administration’s efforts to strengthen community policing and strengthen trust among law enforcement officers and the communities they serve. The Task Force is chaired by Philadelphia Police Commissioner Charles H. Ramsey, who also serves as President of the Major Cities Chiefs Police Association, and Laurie Robinson, professor of Criminology, Law and Society at George Mason University and former Assistant Attorney General for DOJ’s Office of Justice Programs.

The Task Force includes law enforcement representatives, community leaders, academics, and youth leaders. Ron Davis, Director of DOJ’s Community Oriented Policing Services (COPS) Office will serve as the Executive Director of the Task Force under the direction of the co-chairs. The Task Force will examine, among other issues, how to strengthen public trust and foster strong relationships between local law enforcement and the communities that they protect, while also promoting effective crime reduction. The Executive Order directs the Task Force to prepare a report and recommendations to be presented to the President. An initial report will be due to the President in March.

The taskforce will engage with Federal, State, tribal, local officials, technical advisors, young leaders, and nongovernmental organizations through meetings and 21st century technology to provide a transparent process to engage with the public. The Task Force will convene listening sessions where they will hear testimony, including proposed recommendations for consideration, from invited witnesses and also receive comments and questions from the public. The first session will be held in Washington D.C. in mid-January. Subsequent listening sessions and additional outreach details, including the online public comment process, is forthcoming.

Susan Rahr is Executive Director of the Washington State Criminal Justice Training Commission, a position she has held since 2012. From 2005 to 2012, she served as the first female Sheriff in King County, Washington. Ms. Rahr spent over thirty years as a law enforcement officer, beginning as a patrol officer and undercover narcotics officer. While serving with the King County Sheriff’s Office, she held various positions including serving as the commander of the Internal Investigations and Gang Units, commander of the Special Investigations Section, and Police Chief of Shoreline, Washington. Ms. Rahr received a B.A. from Washington State University.

This story is featured in the Washington State Magazine. “These past few years have been exciting for me.  I graduated back in 2011, and my first year as a post grad was by far the toughest of times. Unemployed, my girlfriend  of 3 years and I parting ways, sleeping on my best friend’s couch were not ideas that I had envisioned. I finally got two part-time jobs at Arby’s in Spokane. Budgeting with only $900 a month and an undying faith that times would get better were the only things I had to show for.

Plugging away application after application, a shimmer of hope illuminated and, with only one paycheck, I flew to San Antonio to test for the Department of Homeland Security. Mind you, this was only the beginning back in 2011…  2012 came by and I moved up slightly, landing a job with the Department of Defense as a Security Guard.

I moved to Seattle and was able to be a proud, paying roommate. The area was rank with all types of individuals from the homeless, the drug-inflicted, the criminal, and yet, a security guard in the midst of all this could find a small level of resolve and peace. Then one night, with our leaky roof, I prayed. I prayed so hard to hear something that would improve my situation and set me right on that level. The next morning, October 7, 2012, I got an email from the Department of Homeland Security, stating that my application was approved and pending a final determination, I would report to duty on the 31st of December.

It has now been well over 7 months, and I am loving life. A dream fulfilled and a life learned lesson that states of the journey being the utmost important aspect rather than the destination. I recently graduated from Customs and Border Protection within the Department of Homeland Security as a Customs and Border Protection Officer just this past June and finished up my advanced training just this July. I am currently located in the Grand Canyon State, that is Arizona, and will be here for a little bit.

Through it all though, I would not have traded one thing from my experiences because those same dark days were great eye openers to all the blessings that came through. The amount of support that people showered my way, my friends and family always urging me on, and God who never let me down and continues to show how much He loves me. And besides, if I could survive that massive hill that leads up to the Mall, I could thrive anywhere!”

The Department of Criminal Justice and Criminology and the Criminal Justice News like to keep up with our alumni! One way is by featuring news from our alumni in this newsletter to see what they have been up to since graduating from WSU. We would love to hear from you, as well! Please send information about your life and/or career experiences directly to Azra Rasic. Feel free to include a photo of yourself. We look forward to hearing from you!